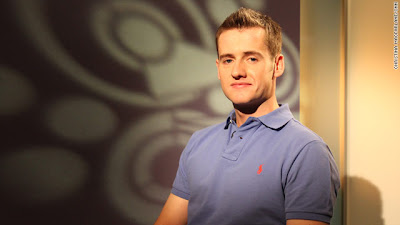 "I was really comfortable with who I am, I was ready to do it, I needed to do it, and I felt the time was right"--Steven Davies

(CNN) -- England cricketer Steven Davies -- the sport's first professional to come out as gay -- says he wants to support other sports personalities struggling with their sexuality. Davies, 24, a wicketkeeper-batsman with county side Surrey who has played in a string of limited-overs internationals for England, revealed his long-held secret earlier this week. "For me it really isn't a big issue, it's something I was comfortable to do," he told CNN. "I'd been thinking about doing it for a while. I'm really relieved to get it off my chest. "Doubts do go through your head, it's only natural... but I was really comfortable with who I am, I was ready to do it, I needed to do it... and I felt the time was right."

Despite the groundbreaking nature of his revelations, the sportsman said he did not regard himself as a pioneer, but simply wanted to help others in similar situations.
He said the decision of Welsh international rugby player Gareth Thomas to reveal he was gay had helped him to take the same step. "It's a very personal matter, and everyone is different, but it is important to have people to look up to and the Gareth Thomas story proved that it can be done, it made it a little easier for me."

And he said he would be more than willing to talk to other sportsmen looking to open up about their sexuality. "Of course I would. Sitting here now having been through it all, I know how hard it is, the sleepless nights, you worry about things that, looking back you didn't need to worry about, so if I can help anyone out who's in the same situation..." Davies said coming out to his England teammates -- which he did before leaving on the recent Ashes tour of Australia -- had come as a big relief.
"Everyone said to me that touring with England should be the best time of your life, and for me the cricket was great, but the off the field stuff was tough. "The dressing room banter, everyone who's played a sport knows how precious the dressing room is, it's a really great environment to be in, but there were times when I couldn't really get involved in the banter, which I'd have liked to do. "I was always worried that it might come back on to me, so I just tried to stay out of the way. "I never lied about my situation, if people asked me if I had a girlfriend, I would say no, but I never told them the truth, that I was actually gay.
"On previous tours, three weeks would feel like three years, and on this one, three-and-a-half months was over so quick." Since making his announcement, Davies said he had been deluged with messages of support -- for which he is hugely grateful -- but admits he hopes the furore that it has provoked will blow over soon. "I want to be remembered at the end of my career as a good cricketer, not a gay cricketer," he told CNN.
Posted by Joshua Lopez at 10:33 AM