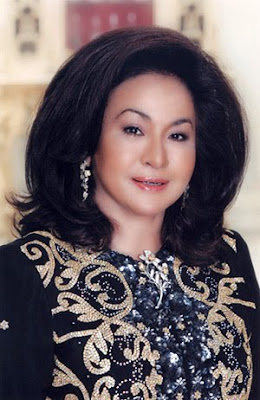 Some bigots still find it hard to understand the difference between Ceremonial Monarchy and Political Figure Head. A Political Figure head is the one that holds the highest executive power. Hence, by Political Practise, The Wife Of the Highest Executive Power is often referred to as "First Lady". And what harm does this title cause? Is it Hazardous to anyone?

In Malaysia, Tun Dr.Siti Hasmah earned it somehow after years of hard work, since then the "First Lady" is commonly used by the wife of the Prime Minister. There is absolutely no need to debate on this. This "title" over the years has evolved due to the significant contributions and involvement of "First ladies" around the world.

When Datin Paduka Seri Endon Mahmood Passed Away, CNN reported very cleary on screen; "FIRST WOMAN OF MALAYSIA PASSES AWAY". Only a bigot would have an issue with this and it takes a bigot to mistake "First Lady" as The Queen. The Queen is Her Royal Highness or Her Majesty. Hence, Datuk Paduka Seri Rosmah Mansor is First Lady Of Malaysia. Period.

Entitled "Potrait of Our First Lady - A Tribute to Datin Seri Endon Mahmood", the one-hour programme will share her history that led her to become Malaysia's fifth First Lady and the legacy that she has left behind. The programme will be screened at 10.00pm tonight, and a repeat will be aired at the same time tomorrow. Tune in to Astro Channel 92 to catch it!


Tun Dr. Siti Hasmah binti Haji Mohamad Ali is the wife of the 4th Prime Minister of Malaysia, Tun Dr. Mahathir Mohamad. She served as First Lady of Malaysia for 23 years from 1981–2003.
Posted by Joshua Lopez at 3:41 PM