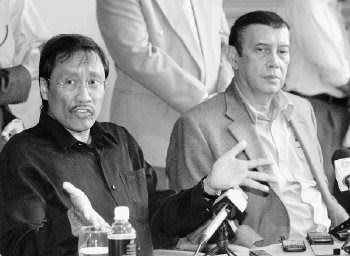 "It's a coincidence. He had asked me to resign the last time, so now I just want Anwar to do the same." - Tan Sri Abdul Rahim Thamby Chik

Let's say for example, if the recordings are true. My question is?

(2) Do you truely think that without the recordings he may have become Msia's next PM?

(3) How is it that all three of you became close to him? May one of you is close to him and isn't this betrayal of friendship?

(5) What was the nature of your "Closeness" to him?

(6) Why suddenly backstab your friend?

(7) Was there a business relationship that turned sour?

(8) What about your linen? Are all your linens pure as an angel?

(9) How is it that a camera was planted but you found it while trying to find his omega watch? You mean you never knew about the camera?

(10) What's the justification for requesting Datuk Seri Dr.Wan Azizah to step down? Hasn't she gone through 13 years of Trauma? By Asking her to step down arent you tring to slaughter PKR?

(11) In this time and age, playing the game of 'morality', Isn't this character assasination with an intention to "murder?"

(12) Since when did politics demand Saints? And to begin with, do Saints exsist in Politics?

(13) Do we need Saints or Leaders Who can Perform? What about, "Rakyat Didahulukan, PENCAPAIAN DIUTAMAKAN?"

KUALA LUMPUR: Former Malacca chief minister Tan Sri Abdul Rahim Thamby Chik admitted that he and two others were behind the sex video scandal which allegedly involved an opposition leader and a prostitute.

"I just want the truth to be known about the person who is touted to be the future leader of the country. I'm not doing this for the money.

"I want to show that this person, who has ambitions of becoming the prime minister, is not qualified," said Rahim.Shuib was absent at the press conference as he was not well.

Rahim denied that this was an act of vengeance against Anwar. "It's a coincidence. He had asked me to resign the last time, so now I just want Anwar to do the same." Rahim added that he was unlike Anwar, whom he claimed had lied and forced him to quit his chief minister's post years ago over the alleged statutory rape of a minor.

He said they had wanted to screen the video two weeks ago, but could not find a suitable place until they decided on Carcosa Seri Negara for its privacy and security.Rahim said the setting up of a commission would stop all forms of political spinning and accusations and the truth would come out.He proposed the panel members to include PKR president Datin Seri Dr Wan Azizah Wan Ismail, Pas president Datuk Seri Abdul Hadi Awang and the attorney-general.

He also named prominent lawyer Datuk Zaid Ibrahim and Perkasa chief Datuk Ibrahim Ali, the media, and representatives from Singapore, Australia and India. Shazryl Eskay, who claimed to be a friend of Anwar since 1996, vouched for the video's authenticity."I am 100 per cent convinced it is Anwar. Why should I lie? But I cannot reveal more as there is a police investigation under way." Shazryl Eskay denied the trio was set up to expose Anwar and claimed he never knew about the recording until Feb 21 this year, when he was asked to search the room for Anwar's Omega watch.

On why the video was only shown to selected members of the media, he said they wanted the media to know about it first before they handed it over to the police."We knew from experience that once given to the police, the opposition will call the video a conspiracy. So, we wanted the public to know about it first through the media," he said. - The Star
Posted by Joshua Lopez at 10:54 AM