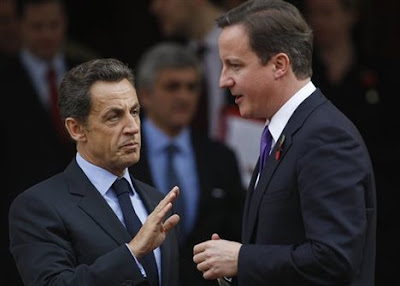 The "murderous madness" of a regime that has "forfeited all its legitimacy."-President Sarkozy

"Colonel Gadhafi has made this happen,". "He has lied to the international community. He has promised a cease-fire, he has broken that cease-fire, he continues to brutalize his own people, and so the time for action has come. It needs to be urgent."- Prime Minister Cameron

"If there is not an immediate cease-fire and withdrawal of the forces that have been attacking civilian populations in the last few weeks, our countries will have recourse to military means,". -President Sarkozy
(all participants at the meeting endorsed the warning)
http://edition.cnn.com/2011/WORLD/europe/03/19/france.libya.meeting/index.html#
Posted by Joshua Lopez at 9:33 AM