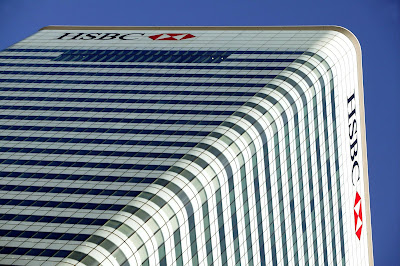 Given The Dire State Of UK's Economy, I'm not at all surprised by this news!

(BBC) HSBC, Europe's biggest bank, has denied reports it is planning to move its head office from London to Hong Kong.

The Sunday Telegraph quoted a major, unnamed investor as saying "we were told that a move [to Hong Kong] is now more than likely".

In a joint statement, both the bank's top executives, the group chairman and chief executive said the talk was "speculative and presumptuous".

The bank moved its corporate base from Hong Kong to London 19 years ago. In a rare joint statement, HSBC's chairman Douglas Flint and chief executive Stuart Gulliver, said: "Talk of emminent change in HSBC's position on this matter is entirely speculative and presumptuous. "London continues to be widely recognised as one of the world's leading international financial centres, a position it has built over many decades through deliberate policy action. We have been very clear that it is our preference to remain headquartered here."

However, it went on to say that the issue of rising costs - and a new government-imposed banking levy - was one that concerned its owners, the shareholders. "We are however, in light of possible regulatory changes and additional costs such as the bank levy, being increasingly asked by shareholders and investors about the likely additional cost of being headquartered in the UK. "We are very clear that the City of London's competitive position deserves protection and HSBC will play a full part in this; we are encouraged by the UK government's recent commitments to do the same."

The bank has said the levy is unfair to its business, which has substantial overseas operations. A spokesman from HM Treasury said banks had to pay their way: "While we are determined that the UK remains a world-leading financial centre, banks must pay their fair share of deficit reduction, which is why the government has introduced a permanent bank levy raising £2.5bn a year."

The report comes one day after Bank of England Governor Mervyn King gave an interview in which he was highly critical of the banks in general, accusing the banks of putting profits before people. He said:"If it's possible to make money out of gullible or unsuspecting customers, that's perfectly acceptable".

As head of the Bank, he will take charge of bank regulation once the forthcoming new watchdog the Prudential Regulatory Authority (PRA) is set up. The PRA will be part of the Bank of England. The Sunday Telegraph quoted one top institutional investor in HSBC as saying: "HSBC has a review of its domicile every three years, normally it's a formality (but) this time we were told that a move is now more than likely."

It quoted another shareholder as saying: "Instinctively we were very surprised by the change of tone. But you can't argue with the numbers. Moving to Hong Kong could deliver a 30% premium [to the share price] overnight."

Last Monday, HSBC reported pre-tax profits of $19bn (£11.8bn) for 2010, more than double the $7.1bn figure for 2009. At the time Douglas Flint expressed concerns over new regulations that will mean banks have to hold sufficient capital to stop them requiring government bail-outs in any future financial crisis.

The BBC's business editor, Robert Peston, said HSBC was "lobbying the government - through the media - over the structure of the banking levy and possible future bank reforms". HSBC makes a small percentage of its profits in the UK - it says 90% of its underlying profits are made outside the country.

It sees Asia as an increasingly important market and Stuart Gulliver has his principal office in Hong Kong.
Posted by Joshua Lopez at 1:08 PM