Emperor Of Japan: Don't Give Up Hope ! 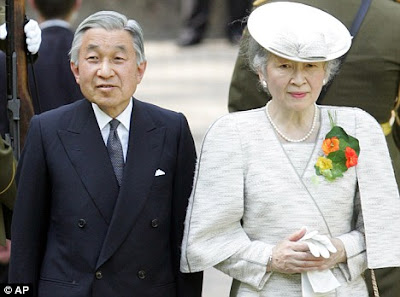 Tokyo (CNN) -- In an extraordinarily rare appearance, Japan's emperor told citizens Wednesday to not give up hope as the country grapples with an epic earthquake, a devastating tsunami and growing fears of a nuclear catastrophe. A televised address by a sitting emperor is usually reserved for times of extreme crisis or War.And Wednesday's speech by Emperor Akihito -- the 77-year-old ceremonial but deeply revered head of the country -- underlined Prime Minister Naoto Kan's earlier assertion that Japan was going through its worst crisis since World War II.
In the address, the emperor said the hearts of the international community was with Japan and that he was moved by his people's calm and order. In such trying times, he said, "We need to understand and help each other." Akihito's speech came on the same day that white smoke and a new blaze at the damaged Fukushima Daiichi's nuclear plant added to radiation concerns.
The fire was discovered Wednesday morning in the No. 4 reactor building at the plant, a Tokyo Electric Power Company official told reporters. It renewed concern over spent fuel rods sitting in an uncovered pool inside, which would release dangerous radiation if they caught fire. Even workers who remained at the plant evacuated temporarily as radiation levels there fluctuated "hour by hour," Chief Cabinet Secretary Yukio Edano said Wednesday. "But on the whole, it does not impose any health hazard," Edano told reporters after levels had decreased Wednesday.
As the government and workers scrambled to stabilize the plant, the search continued for survivors from last week's cruel combination of natural disasters. By Wednesday afternoon, the National Police Agency reported 3,771 deaths. Another 8,181 people are missing and 2,218 were injured, the agency said. The number of dead is expected to go up as rescuers reach more hard-hit areas.
Shell-shocked survivors huddled in cramped shelters, grieved over lost loved ones and worried about relatives who are missing across villages and towns inundated by the tsunami waves off the east coast of Honshu. Frigid temperatures -- including sleet over the decimated city of Sendai in northeastern Japan -- have hampered rescue operations.
In eastern Japan, thousands of people packed Narita International Airport, with some sitting on floors. "We just headed for the mountains directly away from the nuclear power station," Richard Struthers, who lives about 70 kilometers (43 miles) from the Fukushima plant. He said he is "taking no chances" with his baby son. Boris Suban of Moriya -- about 209 kilometers (130 miles) from the nuclear plant -- decided to travel across the country to Hiroshima Prefecture -- a location he admits is ironic.
'We thought that the reactor is not safe and too near," Suban said. "Plus, if the panic spreads, we will be unable to leave Japan and get the full exposure sitting on our sofa." The latest concerns at the Fukushima plant came a day after another fire there and an explosion at the plant's No. 2 reactor.
Japanese authorities could not rule out the possibility of a meltdown at the troubled reactors. Workers have been pumping sea water into reactors in an effort to prevent further damage. A meltdown occurs when nuclear fuel rods cannot be cooled, thus melting the reactor core and causing a release of radioactivity.
In the worst-case scenario, the fuel can spill out of the containment unit and spread toxic radioactivity through the air and water. That, public health officials say, can cause both immediate and long-term health problems, including radiation poisoning and cancer.
Officials were also monitoring reactors No. 5 and 6 at the plant, where cooling systems have raised concerns. "The temperatures are rising, but we are doing our best to cool (them) down," the chief Cabinet secretary said Wednesday.
Meanwhile, across the country, emergency workers from Japan, foreign governments and international aid groups continued to scour tangled and displaced piles of debris, searching for survivors. At least 91 countries and regions and six international organizations have offered assistance, according to the Japanese foreign affairs ministry.
Public broadcaster NHK has reported that 450,000 people were living in shelters. A teacher in Miyagi Prefecture said many schools had turned into emergency shelters. Rescue work is being complicated by the hundreds of aftershocks that have rocked Japan since Friday's quake. The U.S. Geological Survey has reported several quakes with magnitudes of 6.0 or greater, and more than a dozen others greater than 5.0 or greater.
While agencies are working to raise money, donations have been slow to come. The Chronicle of philanthropy, a newspaper covering nonprofit organizations, says donations to nonprofit organizations have reached about $25 million so far.
The total is far below the first four-day totals of other recent natural disasters, including Hurricane Katrina and the crisis in Haiti, it said. Wide-scale economic problems also loom, though some signs of progress surfaced in the stock market on Wednesday. Japanese stocks rebounded Wednesday, with the leading stock index recovering nearly 6% from a two-day plunge. The Nikkei 225 index, the most prominent measure of Tokyo market stocks, ended up 489 points, or 5.7%.
The massive quake was the strongest in recorded history to hit Japan, according to USGS records that date to 1900. Amid the massive despair, tales of survival and euphoric relief emerged. Akiko Kosaka, a student from Japan attending the University of California at Riverside, had lost all hope for her family in Minamisanriku, the fishing village where more than half of the 17,000 residents are missing and feared dead.
"I didn't think they survived," Kosaka, 20, told CNN during a tearful interview Tuesday. "I cried for three days -- Friday, Saturday, Sunday." Then a friend in Japan told her about a 45-second YouTube video showing her family home as the only one standing amid the rubble. The video highlighted her young woman holding a sign to a TV news crew saying in Japanese "we are all safe." The woman was Kosaka's sister.
"I screamed, and my host parents woke up and they thought it was really bad," Kosaka said. "They asked what happened. And I said, 'They survived! ... I couldn't believe it. It's a miracle."
Posted by Joshua Lopez at 5:21 PM