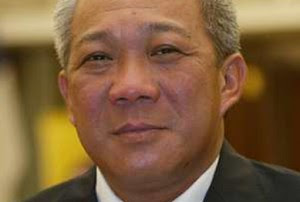 I wander how such a bigot has survived elections this long...He comes from a remote village, hence the feudalistic mentality coupled with utter ignorance! He has proven no respect to his Mother that gave birth to him! He must be voted out!

Petaling Jaya (The Star/ANN) - Malaysia's women's groups have slammed the sexist remarks by Bung Mokhtar Radin against women drivers, calling him a disgrace. Women, Family and Community Development Minister Shahrizat Abdul Jalil said Bung's statement against women drivers was completely uncalled for and offensive. "We are gathering statistics on road accidents from the police to get a clearer picture about the allegation," she said in a statement.

Bung Mokhtar, who is Kinabatangan MP, had claimed that most women drivers were slow and paid little attention while on the road. "When you honk at them, they get agitated with some even showing hand gestures to other drivers," he said in Parliament on Monday. All Women's Action Society (AWAM) acting president Ho Yock Lin called for Bung Mokhtar to resign immediately. "

He is an utter disgrace as a parliamentarian and an embarrassment to his party," she said. Women's Aid Organisation executive director Ivy Josiah said "Bung has driven home the point that he is truly a sexist MP who does not deserve our vote." She added that the Joint Action Group for Gender Equality (JAG) had rightly listed Bung as one of the many sexist MPs in 2008. Expressing shock over the remark, Wanita Malaysian Chinese Association (MCA) vice-chairman Senator Heng Seai Kie called on Bung Mokhtar to undergo a mandatory course on gender equality. "His pathetic utterances betray his warped mentality which has no place in Malaysia," she said. Parti Keadilan Rakyat (PKR) vice-president Nurul Izzah described Bung's sexist remark as being devoid of factual statistics.

The statement also sparked a heated debate on Facebook with some male users agreeing with Bung while women lashed out against him. On Twitter, Penang Chief Minister Lim Guan Eng called Bung a threat to gender equality and said: "Maybe Bung will suggest next that women drivers be banned since they are such a menace." The report was also carried by international news agency AFP.

This is not the first time Bung had made a controversial statement. In response to a female opposition MP during a debate about Parliament's leaking roofs in 2007, Bung said: "Where is the leak? (She) leaks every month, too." He later apologised. A poll posted on The Star Online asking readers if they agreed with Bung's remark that women are lousy drivers revealed that almost 4,000 people had voted with respondents equally split.
Posted by Joshua Lopez at 9:03 PM

First off I would like to say wonderful blog! I had a quick question which I'd like to
ask if you don't mind. I was interested to know how you center yourself and clear your head before writing.

I've had a difficult time clearing my mind in getting my ideas out there.
I do take pleasure in writing but it just seems like the first 10 to 15 minutes are wasted just trying to figure out
how to begin. Any suggestions or tips? Thank you!

Thankyou for your compliments. Honestly, my answer to your question is, PASSION. World Politics, Local Politics & International affairs is My Passion.

I have read a few just right stuff here. Definitely price bookmarking for revisiting.
I wonder how so much attempt you place to make such a fantastic informative site.