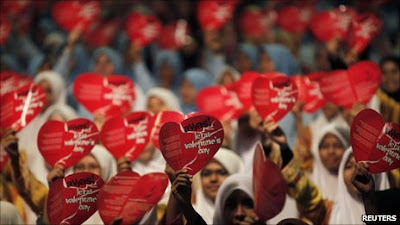 Malaysia's Utter Stupidity has been reported Internationally! Congrats to UMNO & PAS!
(BBC) Malaysia has stepped up a campaign to stop Muslims celebrating Valentine's Day - labelling it a "trap" that could encourage immoral behaviour.

Deputy Prime Minister Muhyiddin Yassin said Monday's celebration of romantic love was "not suitable" for Muslims. (Is It Any Of Your Business?!)

Several Malaysian states are planning to carry out checks on hotels to stop young couples having premarital sex.

The anti-Valentine's Day campaign by the country's Islamic authorities goes back to a fatwa issued in 2005.

Leaflets have been distributed to Muslim university students urging them to avoid Monday's celebration. (And they've all gotten padlocks for their private parts!)

"Islam would reject anything, even from the Eastern culture, if it contravenes the Islamic teachings."

He said Islam had never rejected positive things from the West, noting that it had embraced Mother's and Father's Day.

But not all Malaysian Muslims agree with the campaign, with some saying Valentine's Day is harmless. (The Clear Thinking Ones You Mean?!)

Other faiths are not affected by the boycott in a country where Muslims make up nearly two-thirds of the 28 million population.