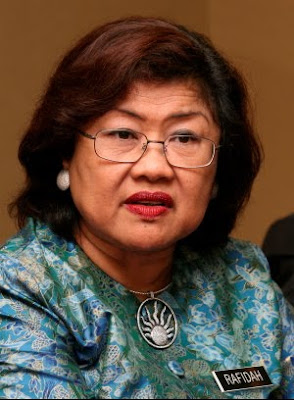 This News Brings Me Great Joy! I Strongly Believe That This Woman Of Brilliance & Stature Is Simply Indispensable! There can never be another Rafidah Aziz!
KUALA LUMPUR, Feb 27 — AirAsia X is to name former trade minister Tan Sri Rafidah Aziz as board chairman this week, a move seen to help boost the long-haul budget carrier's bid for more international routes.
The carrier, which counts British airline tycoon Sir Richard Branson among its shareholders, has not grown as fast as founder Datuk Seri Tony Fernandes expected following the success of short-haul routes operated by the AirAsia Group.
"The board has decided to invite her to take the post and she has agreed," an AirAsia X source told The Malaysian Insider.
An airline shareholder confirmed that Rafidah will replace current chairman Datuk Kamaruddin Meranun, who is Fernandes' main partner in the AirAsia group which includes units in Thailand, Indonesia and the Philippines.
The country's longest-serving trade minister until 2008 is a feisty politician who has negotiated and got her way with counterparts across the world, helping Malaysia become one of the top trading nations of the world.
She defended the Kuala Kangsar federal seat in 2008 but did not return to the Cabinet despite investigations that cleared her over claims that approved permits to import cars went to cronies. Despite the furore, the government is keeping the system until 2015.
The 68-year-old avid golfer is now the patron and advisor to the Malaysia-Europe Forum (MEF) and her latest appointment could help the low-cost carrier win quicker approvals for routes such as those to the United States and the Middle-East.
The airline just began flying to Paris-Orly airport this month and Tokyo's Haneda airport in December with 11 airplanes in its stable. It also flies to Darwin, Perth, Gold Coast and Melbourne in Australia, Christchurch in New Zealand, London's Stansted Airport in the United Kingdom, Iran's Khomeini airport and Seoul's Incheon but scrapped flights to Abu Dhabi due to poor response.
All AirAsia X flights use rights assigned to the Malaysian government, most of it won during Rafidah's tenure as trade minister when countries went for open skies pacts and expanded beyond fifth freedom rights. Most of the rights were given to state flag carrier Malaysia Airlines which has cut back on some routes over the past few years.
AirAsia X is eyeing a public listing in the second half of 2011, depending on market conditions and has completed a RM 100 million rights issue exercise to achieve financial independence and fund its continued growth.
The airline launched its first flight in November 2007 to Gold Coast. As of 14 February 2008, 48 per cent of AirAsia X is owned by Aero Ventures; a venture of Fernandes and other local partners. Branson's Virgin Group own 16 per cent while Bahrain-based Manara Consortium, and Japan-based Orix Corp have taken a 20 per cent stake in AirAsia X for RM250 million. AirAsia owns the remainder 16 per cent of its sister airline. It also plans to list its Thai and Indonesian units. AirAsia said last week net profit hit a record RM1.07 billion in 2010, bolstered by a strong performance in the fourth quarter despite rising fuel costs.
It reported on Thursday that profit for the three months through December soared to RM317 million from RM34 million a year earlier. Revenue for the quarter was up 33 percent to RM1.19 billion amid strong growth in passenger numbers and rising income from the sale of products and services. Last year, the group carried 25.7 million passengers, up 13 percent from 2009.
Posted by Joshua Lopez at 9:30 AM