Cancer Deaths In Europe To Fall in 2011 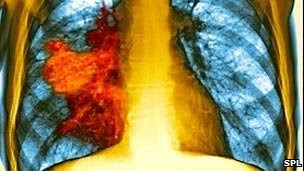 This Is Indeed GREAT News!

(BBC News) Experts are predicting a fall in overall cancer death rates for men and women across Europe in 2011. Using data from the World Health Organization, they say cancer deaths should fall by 7% in men and 6% in women compared with rates in 2007. Overall, almost 1.3 million people will die from cancer in 2011, they estimate.

But they say female lung cancer is rising in all major EU countries except the UK.
According to the researchers, the UK has had the highest rates of female lung cancer deaths for a decade and, although they are not going down, they do appear to be levelling off.
Continue reading the main story

Lung, colorectal and breast cancers are the top causes of cancer deaths, and these are showing major changes”End Quote The study authors Professor Carlo La Vecchia of the University of Milan in Italy and Professor Fabio Levi from the University of Lausanne in Switzerland reached their calculations by looking at overall cancer rates in the EU as well as individual cancer rates in six major EU countries: France, Germany, Italy, Poland, Spain and the UK.

The overall downward trend in cancer death rates is driven mainly by falls in breast cancer mortality in women, and lung and colorectal cancer in men. "Lung, colorectal and breast cancers are the top causes of cancer deaths, and these are showing major changes," say the researchers.
But in the EU as a whole, world standardised death rates from lung cancer in women have gone up from 12.55 per 100,000 of the female population in 2007 to 13.12 in 2011.

However, a worrying increase in deaths from pancreatic cancer in women, which had been observed in 2004, appears to have levelled off. Professor Stephen Spiro, of the British Lung Foundation, said lung cancer remained the most common killing cancer in men and women and was related to smoking in 80% of cases. "Over the last 30 years, lung cancer rates have dropped in men as they have quit smoking in large numbers. However, this trend is not seen in women as nearly a quarter continue to smoke.

"The rates of lung cancer in women are not falling in the UK and the disease has overtaken breast cancer as the most common cause of cancer deaths in the UK and in many European countries." Mike Hobday, head of policy at Macmillan Cancer Support, welcomed the fall in death rates but warned the number of people living with cancer in the UK was increasing by 3% every year.

"We know that there are currently two million people in the UK living with a cancer diagnosis, if the current rate continues, the number will have doubled to four million people by 2030. "Cancer is changing. For many cancer is now a long-term condition and it is important to realise that it is no longer just about people dying quickly of cancer or being cured."